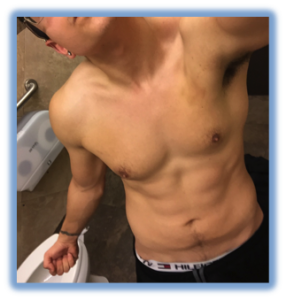 “I first met Nate when I started working at 24 Hour Fitness years before he opened his studio.

Nate soon transferred to another location to be their fitness manager. I hadn’t seen Nate for years. I ran into Nate at Freebirds and talked to him for a few minutes. He seemed to genuinely care about everything I was doing and how I was.

He actually recommended I look into some strength coaches for some of the topics we discussed. It really shows the kind of guy he is smart as hell, humble and genuine about wanting to help others. Another year probably went by and I had an over the handle bar downhill mountain biking accident that led to a back injury.

After recovering it was hard for me to find the motivation to workout consistently with everything that was going on at the time. It was like I lost my mojo. I called Nate up and we scheduled our assessment. I was weak by my standards and that was all to change very quickly.

Nate uses exercises that we all know work and have stood the test of time as well as the newest cutting edge information. Which is all grand and fine.

The difference between Nate and other trainers is he delivers the valuable pearls of information on how to actually execute them. The nuances of his training set him apart and his ability to progress below average clients to being strong and confident is something unique. It’s really cool and inspiring as a trainer stepping into a place where you have and older population of doing the things he has them doing. It’s been one year now and I went from unmotivated to never missing a workout.

Not only did I get everything I was looking for which is consistency. I couldn’t thank Nate enough for transforming me not only mentally and physically but as a fitness professional too. So the nitty gritty body composition stuff is only a perk but I went from being 165lbs@16%BF to 163lbs@10%BF in the first four months to nearly a year later 180lbs@13%BF.

Get My Pricing, Services, and 2 Free Weeks!

Get a Free Consultation

Stop In For A Tour…